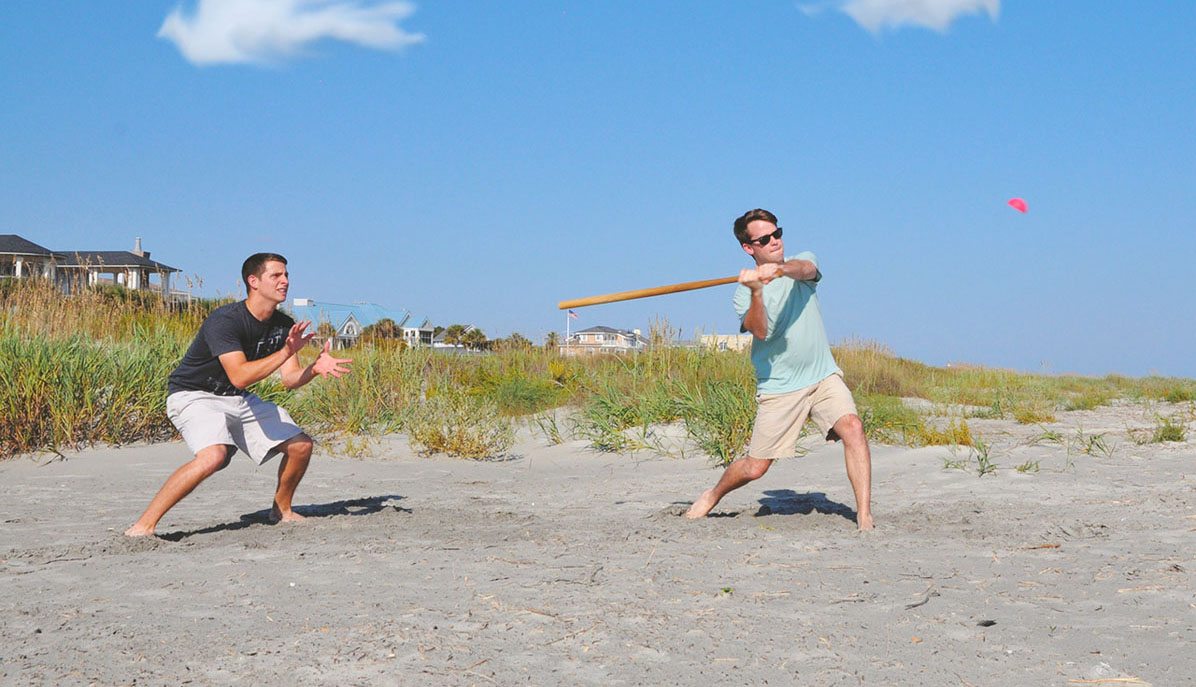 As with many things in life, Charlestonians take liberties with the ordinary rules of leisurely games. It’s no surprise that the same city where people sit on piazzas instead of porches, order drinks “2, 3 ways” and consider madras bowties formal wear, has created its own versions of several standard activities. Here, we look at 3 of the more popular. 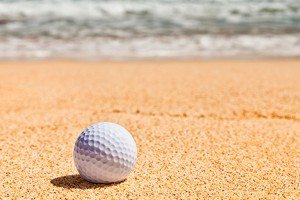 Charleston’s take on beach golf was invented in the early 1990s by native Thomas “Big T” Alexander. It requires a beach and at least two players, each with a putter and ball. But after this, there are no formal rules. Scoring, course layout and other details are left to the discretion of whoever brings the playing equipment — and refreshments. This player outlines a fairway and green in the sand and establishes par. He or she also decides the order of play, whether a putt can be re-hit in mid-roll if it’s headed into the Atlantic, and if penalties incur. Rules can even change mid-swing. The leader also keeps the score, a job that virtually guarantees a lopsided win.

Although it’s been played for at least 90 years, no one can say where half rubber started. Charleston claims to be the official birthplace, but so does Florence, Myrtle Beach and Savannah. As its name suggests, half rubber is played with half of a rubber ball. Some purists say the proper tool to produce this object is a deli-style meat slicer. Just shave off pieces of a rubber ball until the desired shape is reached. (Those pieces make handy coasters.) But if you don’t know a deli owner, a pocket knife will serve nicely. Next, you need about four feet of a broomstick. You can even buy a stick and half a ball prepackaged, but purists may razz you about your store-bought equipment.

Play requires three or more people. If you play with three, it’s every man for himself. If more, you divide into teams. One person pitches, one catches and a third stands between them swinging the stick. The half-ball’s unique shape results in dips and curves. Making contact is so difficult, any hit is considered a single. A miss is a strike, unless the catcher also catches it, which makes it an out. By some rules, a tipped ball caught by the catcher counts as two outs. You’re also out after three strikes or if you hit a fly that’s caught. Three outs and your inning is over. The game continues until reaching a pre-agreed number of innings, until the half rubber disappears down a storm drain, or until happy hour starts. 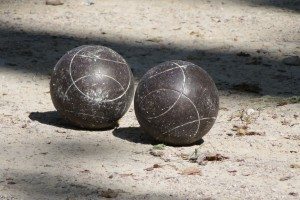 Egyptians played a Bocce-like game 7000 years ago, but credit for the modern version goes to the Italians. The pallina is a small ball. A player from one team throws it a few yards away and then two teams alternately throw larger balls at it. Points are scored by landing your ball close to the pallina. The more balls you leave inside your opponents’ closest ball, the more points you score. Spocking (or bombing) is the art of hitting an opponent’s close ball and knocking it into the Mediterranean, or whatever ocean you have handy. This aspect of the game also translates nicely to Charleston. While bocce is usually played on a finely manicured lawn, in Charleston, it’s played on the beach. This leads to some interesting play, with challenges such as sand dunes, tidal pools, sunbathers, sand castles, shells and the incoming or outgoing tide.

Beach golf, bocce and half rubber add their charm to the many other unique Lowcountry traditions that once led a Civil War era statesman to describe South Carolina as a place “too small to be a republic and too large to be an asylum.” Regardless of the implications of that statement, Charlestonians are happy with their games and are unimpressed by how anyone plays them anywhere else.