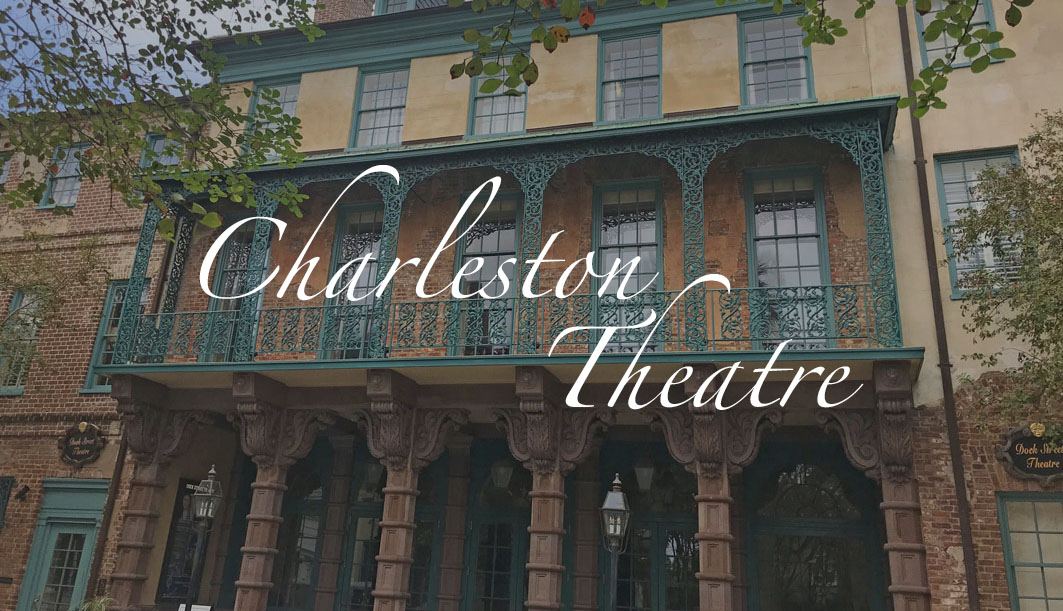 Charleston is home to many firsts, including America’s first museum, first golf course, first regularly-scheduled passenger train, and of course the first historic district. But did you know we also had the first theatre – which predates America itself?

Two Charleston theatres are DHM’s neighbors in the French Quarter neighborhood of downtown Charleston. Each has its own place in our nation’s dramatic history. Here are their stories.

The oldest and most famous place to experience live theatre in Charleston is the historic Dock Street Theatre. It is located on the corner of Church Street and Queen Street, which was previously named Dock Street. The original structure on the site dated to 1736 and was the very first building in the colonies constructed exclusively for live theatre.

Its first production was of George Farquhar’s rather risqué play, The Recruiting Officer. This popular 18th century script was also the first to be staged on Broadway, and continues to be performed contemporarily. The first opera recital in America, Flora, also took place at the Dock Street. 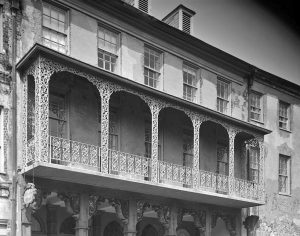 That original building was probably lost along with many of its neighbors in the Great Fire of 1740. Roughly 70 years later, in 1809, the current building was erected on the site. It operated as the Planter’s Hotel for the next 136 years. In 1835, a balcony trimmed with exquisite iron railings was added. That balcony still exists above the current entrance.

Unfortunately, the Civil War destroyed much of the rest of the hotel. It stood in disrepair until the Great Depression, when it was slated for demolition. However, in 1935, the building was purchased by the City of Charleston and renovated as a Works Progress Administration (WPA) project. The interior of the existing hotel was retrofitted to return the building to its original purpose as a live theatre.

More than 100 years after its first opening performance, the restored Dock Street Theatre held a second grand opening in November 1937. Following historic precedent, it staged a revival of The Recruiting Officer. The revitalized theatre enjoyed decades as Charleston’s primary venue for stage performances. It earned recognition on the National Register of Historic Places in 1973.

But by the 21st century, the stage was showing its age. Dated facilities and uncomfortable seating drew from its appeal. This time, the City of Charleston undertook a state-of-the-art renovation. Completed in March 2010, it leaves the Dock Street well-equipped to enter its fourth century at the heart of Charleston’s artistic community.

Since 1978, Charleston Stage has been the resident theatrical company at the Dock Street. They produce more than 100 performances each year. Today, you can experience live theatre in America’s first playhouse, as countless residents and visitors alike have over the years. The current schedule is available here.

While the Dock Street is the oldest physical theatre in Charleston, the Footlight Players are the longest existing theatre company in the city. Formed in 1931, they originally acted on various stages around Charleston, including the Dock Street. In fact, they are the troupe who performed at the 1937 second opening of the Dock Street Theatre. They remained in residence there until 1941. 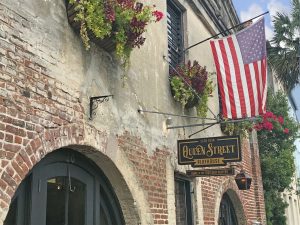 By that time, the Players realized the need for their own performance space. They had purchased a c. 1850 cotton warehouse at 20 Queen Street back in 1934. That facility initially functioned as storage and scenery construction space, but soon proved an ideal location for their needs. Volunteers remodeled the building into a true community playhouse.

Over the next few decades, the Footlight Players regularly performed at their own theatre as well as the Dock Street and other locations throughout the city. In 1986, they moved exclusively to the Queen Street location. However, it was more than 30 years later, in August 2018, that the current name was adopted. Today, the Footlight Players host dozens of live performances each year at the rebranded Queen Street Playhouse.

There are plenty of other live theatre venues in the Charleston area. Light-hearted comedy, mystery, magic, and musical shows make for a fun night on the town. Pure Theatre and the Woolfe Street Playhouse are more contemporary spaces, while the grand Gaillard Center and the North Charleston Performing Arts Center bring in national and international artists and productions. And don’t forget our local college and university drama departments. Even with all these choices, the Dock Street Theatre and Queen Street Playhouse retain their own revered places in Charleston’s dramatic history.