The Holy City has many spectacular views and landmarks, but perhaps none so remarkable as the Arthur Ravenel, Jr. Bridge. Tens of thousands cross Highway 17 between Charleston and Mt. Pleasant on it every day. However many – especially newcomers to the area – don’t know its story. The DHM Blog takes a look at how we got the engineering marvel that is the Ravenel Bridge.

DESIGN BY THE NUMBERS 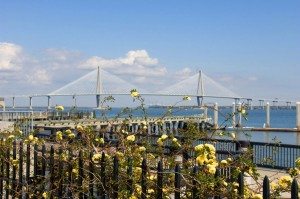 The Ravenel Bridge is a cable-stayed suspension bridge with dual diamond towers, each rising 575 feet. At 1546 feet, the main span was the longest in the Western Hemisphere when it was completed. It is now the third longest. 128 cables connect the towers above to the roadway below. There are 8 lanes for vehicular traffic plus bicycle and pedestrian lanes. Interestingly, the original design did not call for the bike or walk lane. Grass-roots enthusiasts backed by Charleston Moves led the call for what is now one of the most popular outdoor activities in Charleston. It is officially known as Wonder’s Way, memorializing late bicyclist Garrett Wonders.

Have you ever noticed the tops of the diamonds seem incomplete? That’s because the initial design called for them to be topped with large beacons of light that would be seen for miles. However, wildlife conservationists pointed out this could confuse endangered sea turtle hatchlings from following the moon to the waterline. As a result, the bridge only has functional, not decorative, lighting.

The Ravenel Bridge replaced the functionally obsolete 2-lane Grace Bridge (1929) and 3-lane Pearman Bridge (1966), locally known as the “Old Cooper River Bridge” and the “New Cooper River Bridge.” As any local can tell you, driving over the Old Bridge, especially at night or in the rain, was a daunting experience not for the weak of heart. In fact, many people refused to drive the bridge, limiting population growth in Mt. Pleasant. An interesting piece of trivia is that the towers of the Ravenel are named for the original bridges: Grace and Pearman. In fact, sculptures made with metal salvaged from the old bridges can be found on each of the towers. 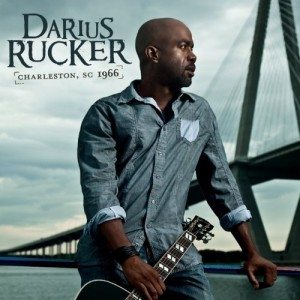 By 1995, the twin spans were both functionally obsolete. In addition, they limited port traffic, as their clearance above the Cooper River (once among the highest in the world) couldn’t accommodate large, modern shipping vessels. Credit for spear-heading the 20-year funding effort to replace the bridges goes to retired US Congressman Arthur Ravenel, Jr. The overall price of the new bridge that would be named after him totaled approximately $700 million. Funding came from local, state, and federal sources through the SC Infrastructure Bank, which was created for that purpose.

Construction began with a groundbreaking ceremony in Mt. Pleasant in 2001. The bridge was a design-build project in a joint venture between two companies (Tidewater Skanska of Norfolk, Virginia and Flatiron Constructors of Longmont, Colorado) operating under the name Palmetto Bridge Constructors. Erection of the two approaches from Mt. Pleasant and the Charleston peninsula, as well as the two towers, was simultaneous. Each span rose from the shore to eventually meet in the middle of Charleston Harbor. All construction occurred while the old bridges remained fully operational – crossing directly over the old spans and cars passing below in some places!

As the bridge was being built, locals wondered what they would call it. The “New, New Bridge”? Just the “Cooper River Bridge”? More colloquial suggestions included the “Cuz-way” for “Cousin Arthur.” As a testament to his part in securing the funding, the bridge was named after Arthur Ravenel Jr. and is known simply as the “Ravenel Bridge,” rather than by a nickname.

A week of festivities led up to the official opening of the bridge. It included a gourmet dinner served on the bridge and the opportunity for all citizens to walk the lanes before they opened to vehicular traffic. People of all ages and abilities came from the tri-county area and beyond to do so. It’s said the number of people who turned out that day equaled the entire population of Charleston. The evening before the opening, a concert with a fireworks display (the largest in Charleston history) lit up the sky. The bridge officially opened on July 16, 2005 – amazingly a year ahead of schedule and under budget.

Engineers designed the Ravenel Bridge to withstand earthquakes, high winds of a hurricane, and even being hit by ships (which actually happened to the Grace in 1946). One thing they apparently did not take into consideration was the unusual occurrence of ice on the cables. In January 2014, a rare ice storm hit the area and massive icicles formed on the cables, then broke off, pelting drivers below like missiles. Thankfully no one was injured. However, as a safety precaution, the bridge was closed for several days. This severely disrupted traffic and thrust Charlestonians back into the days before a bridge crossed the Cooper River. This hazard has since been addressed.

The final chapter in the story of the Ravenel Bridge was the demolition of the old bridges, completed in 2007. The explosions used to bring down the last of the old spans were heard and felt for miles around. With that, the Charleston skyline forever changed and one era ended while a new one began. The only physical remnant of the old bridges is a support left standing along East Bay Street across from aptly-named Grace Bridge Street.

Crossing the bridge is now a marvel instead of a hazard. The population of Mt. Pleasant has expanded accordingly. Community parks are housed underneath it, with additional amenities to come. Perhaps its most famous use is for the annual Cooper Bridge Run, one of the largest 10Ks in the country. The race was first hosted on the Ravenel in 2006. The bridge has been featured in popular culture in music, movies, and television shows. 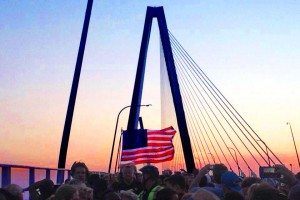 The Ravenel Bridge has also become a community gathering place. After the tragic shootings at Emanuel AME Church, a local group of women organized a show of support. They invited citizens to come together and hold hands across the pedestrian lane from Charleston to Mt. Pleasant as part of the Charleston Strong movement. On June 21, 2015, this “Unity Chain” drew upwards of 15,000 participants and became national news.

The Ravenel Bridge has quickly become an iconic and well-loved landmark in Charleston. In addition to vehicular traffic above and boats below, pedestrians and bicyclists cross the bridge day and night in all weather. Walking the bridge is a mainstay for tourists and athletes as well as commuters. Photographing the spans from the roadway, the water, or the air is an art form in itself. Views of the bridge are a huge real estate selling point. DHM has Dockside condos for sale with amazing bridge views.

We would love to hear your stories of traveling over the old bridges as well as the Ravenel Bridge. Please share your memories along with photos in the comments.

One thought on “The Ravenel Bridge”