The single house is an architectural style found almost exclusively in Charleston, SC and this home plan gives the historic city much of its unique charm. The layout of a single house is ideally suited to the narrow street-facing lots originally laid out in Charleston in the late 17th and early 18th centuries (see Grand Modell). The homes are only one room wide and two rooms deep on each level, with a central hall between. Typically a porch, or piazza as it is known in Charleston, runs the length of the house with a public door facing the street. Visitors must enter the home through this entrance and traverse the porch before entering the central private door into the home. To take best advantage of prevailing breezes, piazzas always face south or west.

Public spaces, like an entry or office, inhabit the first floor. Entertaining spaces, such as drawing rooms, withdrawing rooms or ballrooms occupy the second floor – above the hustle and bustle (and mess and smells) of the streetways. Family spaces and bedrooms are found on the third floor. Each room would incorporate more or less decorative detail according to its use, with second floor spaces having the highest ceilings with intricate and colorful moldings. Those high ceilings, coupled with tall windows (often floor-length to accommodate walking out to the piazzas) allowed breezes to flow through the rooms and helped make Lowcountry weather more bearable.

Outbuildings, such as kitchens, stables and carriage houses, were constructed separate from the main house to the rear of the property. Today, many of these have been converted into separate residences (and given rise to the unique ½ address that dot the Charleston Peninsula). Other outbuildings were later connected to the main residence via “hyphens.” Kitchens were built away from the main house in an attempt to prevent fires — such as the numerous ones that destroyed large swaths of the peninsula — from spreading to the living quarters. This is also why the back wall of the main houses had fewer windows than might be expected for ventilation. 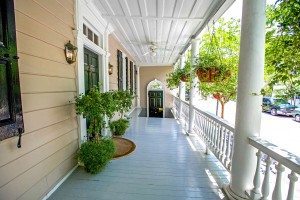 Various decorative styles have been applied to the single house layout, including Federal, Greek Revival, Italianate and Victorian. Two and three-story piazzas often employ the classical order of columns with the ground level being Doric, followed by Ionic and Corinthian. Formal gardens beautified the side yards to be enjoyed from the shady porches. In fact, upper porches were sometimes used as sleeping quarters on hot, humid nights.

Don’t believe a tour guide who tells you single houses were a reaction to the city taxing street frontage. Instead, “early Charlestonians developed the Single House as an ingenious solution to the various demands of their unique urban landscape: a house that provided privacy, ventilation, fire protection, and social status within the confines of a tightly restrictive public space.” (credit Charleston County Pubic Library)

If this style historic home appeals to you, contact us for a list of Charleston single houses currently for sale.