If you’re not from the Lowcountry, you might be curious about those long green planks on rockers that grace the piazzas of many Charleston, SC homes. They’re called joggling boards, and their history and folklore are quite interesting.

CREATION OF THE JOGGLING BOARD

Joggling boards are typically 16 feet long and made of flexible pine painted Charleston green (a tint so dark it almost appears black). Although they are mainly used for decoration or fun seating today, they actually started out as an exercise device. According to legend, the first joggling board was built at Acton Plantation in Sumter County in the early 1800s. The owner of the plantation, Cleland Kinloch, was a widower who invited his widowed sister Mary Huger to run the household. That woman developed rheumatoid arthritis that made it too painful for her to do many activities. Riding in a carriage that was outfitted with a rocking chair was one of the few things she could enjoy. Upon hearing this, the Kinlochs’ relatives in Scotland devised an apparatus that would simulate the movement of a carriage ride and gently “joggle” its occupant back and forth, up and down, providing a little exercise and joint pain relief. The result was the joggling board.

Soon many houses in Charleston and across the state had joggling boards. They provided a fun way to relax on your porch or in your yard as you enjoyed the breezes and took a break from the southern heat. Throughout the 19th century they became so ubiquitous that they made their way into some of life’s most important events. 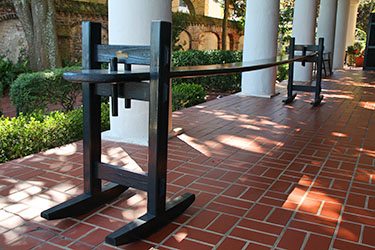 One of the more colorful stories in Southern lore says that no house with a joggling board on its front porch has an unmarried daughter living there. Back in the days when proper young couples couldn’t be alone together without supervision, the distance of the joggling board was deemed adequate protection. So if the young lady sat on one end and her suitor on the other, they were far enough apart not to require a chaperone. But as they talked and joggled, they’d slowly move closer to each other. If they got so close that his hand touched her knee, her reputation for purity would be ruined and he’d be forced to propose marriage. Imagine a father concerned that his daughter may become a spinster deciding that his best option was to get a joggling board!

Another popular use was to rock babies to sleep. Nannies were often seen soothing fussy infants with the gentle swaying motion.

In the 20th century, the cost of suitable lumber increased to the point where joggling boards fell out of fashion. Today, however, they are enjoying a resurgence in popularity. One of the first companies to bring them back is based in Charleston.  They harken back to a more genteel time and still provide an enjoyable place to sit. Plus they require less space than a porch swing. As not all houses have expansive porches, modern versions are built in various smaller sizes. They are particularly well-loved by children.

If you would like to see and try out a joggling board, they are found in several museum houses in Charleston. Please visit the Edmondston-Alston House or the Nathaniel Russell House in downtown Charleston or Middleton Place in West Ashley.

Would you like to have a joggling board in your Charleston home?

One thought on “The Joggling Board in Charleston, SC Homes”