Take a step back into history and explore the beautiful antebellum neighborhood South of Broad in Charleston, South Carolina. The district dates back to 1721 and features rare historic homes amongst cobblestone streets. One of the true gems of the South, this neighborhood is a beloved part of downtown Charleston. It boasts traditional southern architecture and homes that look straight out of an American storybook. 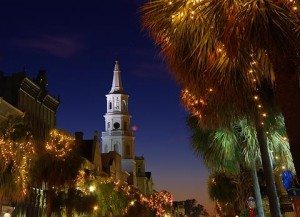 While Charleston has many beautiful and unique neighborhoods to offer residents and visitors alike, South Broad is arguably the most renowned. Located between the Ashley and Cooper Rivers, many of its well-preserved homes offer views of the Charleston Harbor. It encompasses the original walled city of Charleston as well as early-20th century infill projects. Famous Rainbow Row is located South Broad. This stretch of East Bay Street hosts several colonial Georgian row homes painted different pastel colors and is a top tourist attraction in Charleston. The Four Corners of Law, so-named by Robert Ripley, is at the intersection of Meeting and Broad Streets. In this part of town you’ll see guests in horse-drawn carriages viewing the grand mansions.

Some key sites to visit South of Broad include:

Battery and White Point Garden: a public park with Spanish moss-draped oaks and Civil War cannons. It is bounded by a seawall walkway where Charlestonians like to say the Ashley and Cooper Rivers combine to create the Atlantic Ocean.

Sword Gate House: the oldest residence on Legare Street, with its famous wrought iron gates that match the pair at the Citadel.

Heyward-Washington House: a museum house of The Charleston Museum. Declaration of Independence signer Thomas Heyward, Jr. lived there. President George Washington stayed there during his 1791 visit to the city.

Edmonston-Alston House: another residence that is open to the public. Stand on the porch where General P.G.T. Beauregard watched the bombardment of Ft. Sumter, starting the Civil War. Still owned by the Alstons, its collection houses many historic family pieces.

Calhoun Mansion: the largest private home in Charleston. You may tour this Italianate beauty’s extensive collection of decorative arts and furniture, and even access the widow’s walk for an incomparable birds-eye view of the lower peninsula.

Old Exchange and Provost Dungeon: one of the America’s most-important Colonial civic structures. Your tour includes one of the few places to see an exposed part of Charleston’s original wall.

Don’t take offense if someone refers to you as an SOB; in Charleston, it’s a moniker for those who live South of Broad. A popular restaurant just up East Bay Street has made a clever play on this term, calling itself SNOB, short for Slightly North of Broad. Enjoy their local shrimp and grits for dinner or Sunday brunch. 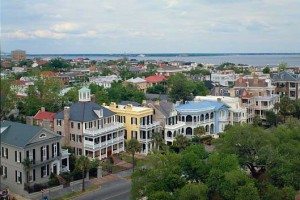 While the area is mostly residential, you’ll also find plenty to entertain. Stroll through the shops and art galleries along Broad Street and the French Quarter or attend one of the quarterly Art Walks. For a bite to eat, enjoy a glass of wine and a cheese plate at goat.sheep.cow, which is housed in a building over 200 years old. In nice weather, why not pack a picnic lunch for White Point Gardens? For a relaxed meal in a social atmosphere, you have the Blind Tiger Pub, named for Charleston’s infamous speakeasies. In the mood for French food? Join a communal table at Gaulart & Maliclet. If you prefer a fine-dining option, try Oak Steakhouse. And to wet your whistle, be sure to stop by The Tavern to pick up some local spirits. Founded in 1686, it’s the oldest liquor store in the country.

As you explore the alleyways and streets South of Broad, you’ll notice the unique Charleston Single House style of architecture that lends the city much of its historic charm. Most of the homes are covered by easements to retain this historic look and fabric of the city. Disher, Hamrick & Myers regularly has several beautiful historic homes and condos for sale South of Broad that will fulfill all your Southern home dreams. Let our team of Charleston real estate agents show you a piece of history you just can’t find anywhere else!

View All Homes For Sale South of Broad