Disher, Hamrick & Myers takes this opportunity to look back at a school that operated South of Broad for almost 50 years: the Andrew B. Murray Vocational School. The school was named for Andrew Buist Murray, who had grown up in the Charleston Orphan House. He became one of the city’s most successful businessmen and one of its richest citizens and most prolific patrons. He also served on City Council. 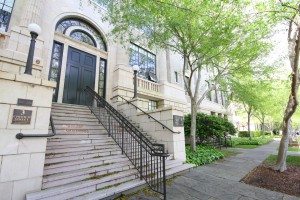 Beginning in 1909, Murray encouraged the city to fill in mash land on the peninsula. Among the streets created were Murray Boulevard on the Battery, which was named for him, and Chisolm Street. The latter was named for a family that ran a rice and lumber mill in the area since 1830. (The area now known as the Horse Lot was the mill pond. It was filled in and is now a public park.) To give back to the city, Murray donated the land at 3 Chisolm Street along most of the money to build a vocational school – the first of its kind in South Carolina.

Construction on Murray Vocational School began in 1922 and was completed in 1923. The 3-story main building was designed by architect David B. Hyer, who had been superintendent of construction at the Charleston Navy Yard and also built Buist Academy on Calhoun Street. Its Neoclassical Revival style was popular for civic buildings at the time. Construction was considered fireproof. Interior spaces included shops, offices, a lunch room, classrooms, a library, lab, print shop and lecture room. A 2-story brick custodian’s cottage was also on the property. Today it is the only school caretaker’s housing remaining in the city.

Boys over the age of 14 initially could enroll in one of two tracks: auto mechanics or wood working. Practical hands-on instruction took up half the day, while general instruction in related fields of science, math and drawing comprised the other half. As most institutions of the time, the school was segregated and only served whites. It was also originally all-male. In the 1930s girls were admitted, but with a different set of courses: cosmetology, home economics or sales. During WWII, focus switched to preparing students for the war effort.

In 1950 the school expanded with a new auto shop because cars since the 1940s were too big to fit in the old location. This structure also served as a gym and still stands today. Murray Vocational School held public school day classes, as well as night classes for adults, until 1970. Then from 1970-1995 it was the Charleston School District offices. The building was abandoned when the school district completed its new headquarters on Calhoun Street. It was also briefly used by the US Coast Guard, but stood mostly vacant from 1995-2001. In 2002 it was named to the National Register of Historic Places, eligible for both its architecture and its historic value representing a vocational school and a segregated school. 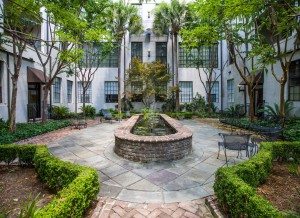 In the early 2000s, the main school building, gym/shop and caretakers’s cottage were restored and converted into condominiums. A very successful example of adaptive reuse, the exterior remains largely the same as when it was the Murray Vocational School. Many original interior features were also preserved. The renovation received a Carolopolis Award in 2003.

Today, 3 Chisolm Street condos take advantage of the building’s civic and industrial past with soaring ceilings, striking large-scale windows, and wide-open living spaces. The courtyard is beautifully landscaped and offers residents an outdoor gathering space. The “Horse Lot” park is right across the street for exercise or dog-walking. Colonial Lake is a short walk away. Off-street parking is included. If you desire a contemporary loft lifestyle while still being South of Broad in Historic Downtown Charleston, 3 Chisolm Street is for you! Disher, Hamrick & Myers has sold several condominiums in this building. Please contact one of our agents today if you would like to make 3 Chisolm Street your Downtown Charleston home.

One thought on “Murray Vocational School”