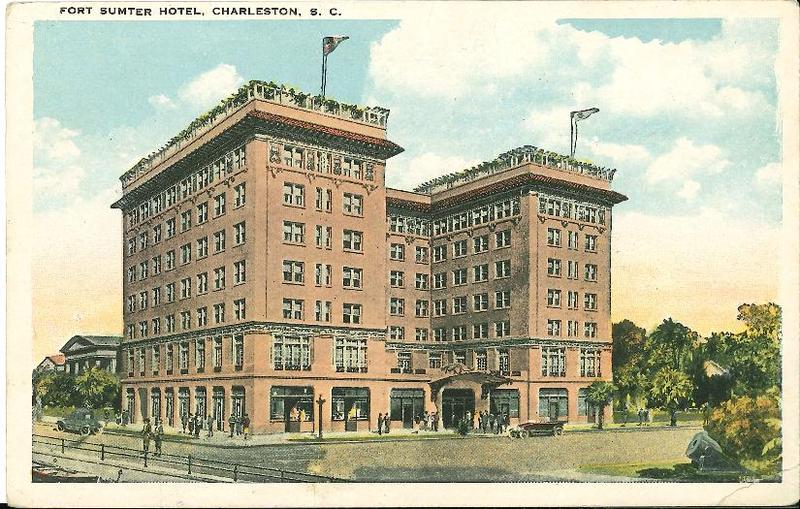 Fort Sumter House at 1 King Street began its existence as the Fort Sumter Hotel, which opened to guests in 1924. Designed by prominent commercial architect G. Lloyd Preacher of Atlanta, GA, the Spanish Colonial-style structure was built at a cost of $850,000. The 7-story building is located along the South Battery, directly adjacent to White Point Garden. At its inception, it was the tallest building as well as the only luxury hotel on the Charleston Peninsula. A 1929 brochure boasts, “spacious lobbies, sun parlors and terraces, comfortable and luxuriously furnished, overlook the water and offer cordial hospitality in an atmosphere to be found in few hotels.”

The second floor featured a grand ballroom and lounge. The ground level housed a dining room which for many years was one of downtown Charleston’s few restaurants. From 1954-1973, this eatery was called the Rampart Room. It was decorated with images of Southern Colonels and murals of Charleston scenes. A rarity in its time, it touted air conditioning and “manufactured ice” in its drinks.

The Fort Sumter Hotel has had its share of notable guests. John F. Kennedy, then a young Naval intelligence officer, stayed in 1942. While there, he engaged in a tryst with a suspected German spy that was recorded by the FBI. The ensuing scandal changed the course of history. Playwright Tennessee Williams and Producer Irene Selznick visited in 1947. In fact, Williams hand wrote scenes for “A Streetcar Named Desire” on hotel stationery. Between those dates it served as the headquarters for the Sixth Naval District (prior to its move to the old Navy Base), before being remodeled and returned to hotel operation. 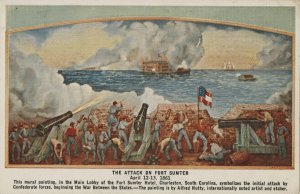 Throughout the 1950s, famed Charleston Renaissance artist Alfred Hutty’s paintings and etchings were on permanent exhibit in the hotel. He even held annual exhibitions there in the hopes of selling this work to the steadily-growing number of tourists in the Holy City. His 1949 mural “Attack on Fort Sumter” still hangs in the hotel lobby today.

In 1967, Sheraton purchased the hotel for $435,000 and spent half a million dollars on renovations. They would be the last corporation to run the Fort Sumter as a hotel. In 1973, a group of local investors bought the property for $850,000 – the same price as it originally cost to build half a century earlier. The Fort Sumter Hotel closed in 1973 and its 225 rooms were converted into 67 condominiums at a cost of $2 million. The condo conversion required a change in zoning which then-Mayor Palmer Gaillard said would “have a major significance on zoning throughout the city.” A contemporary marketing piece noted that “Fort Sumter House represents the only high-rise structure of its kind in the historic area of the city, local sentiment and strict zoning dictate that no other structures of this height can ever be constructed.” Today, there are 72 residential units and businesses have returned to the ground floor. Fort Sumter House is one of many notable examples of adaptive reuse in this historic city. 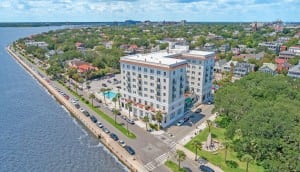 Residents of the building enjoy panoramic views of White Point Gardens, historic Battery mansions, city rooftops and steeples, the Ashley and Cooper Rivers, Patriots Point and the Yorktown, and even Fort Sumter and the Atlantic Ocean. The South of Broad location at the corner of King Street and Murray Blvd. can’t be beat. Amenities include on-site security, parking lots, an exercise room and private palmetto tree-lined pool along the Battery. If you would like to live in this piece of Charleston history, Disher, Hamrick & Myers is offering a top floor, corner unit for sale. Contact Real Estate Agent Saida A. Russell at 843.478.9391 for more information.